Rehabilitation of a Patient with Limited Opening with a Two-piece Magnetically Retained Obturator: A Case Report

Maxillofacial defects can occur secondarily due to trauma leaving an oro-antral communication with speech issues. Surgical reconstruction of the area is not always feasible and therefore a prosthesis may be required to restore speech and function. Surgical attempts at reconstruction may create a limited interincisal opening, which in turn makes the fabrication of a prosthesis a significant challenge. This case report is presented to describe the fabrication of a sectional obturator prosthesis to restore speech, function, and lip support in a patient with limited mouth opening. To provide a stable obturator prosthesis, the prosthesis had to be fabricated in two separate parts then attached intraorally with magnets (Steco Titanmagnets).

How to cite this article: Powell N. Rehabilitation of a Patient with Limited Opening with a Two-piece Magnetically Retained Obturator: A Case Report. Int J Prosthodont Restor Dent 2021;11(4):206-208.

The etiology of maxillofacial defects can range from neoplastic, traumatic, fungal, as the result of drug abuse, and osteonecrotic. The resulting palatal defect, irrespective of size, can cause a significant change in the patient’s esthetics, mastication, and speech. One of the principal goals of maxillofacial prosthetics is to restore function, phonation, and esthetics to these patients.

Obturators aid in restoring function in allowing for the restoration of normal palatal contours, speech, and swallowing. In the fabrication of an obturator prosthesis, the insertion, and removal of the prosthesis needs to be considered particularly in those patients with microstomia.1 Principles of conventional prosthetic design at times will need to be altered in order to allow for the fabrication of a definitive, functional prosthesis. A sectional prosthesis may need to be considered for those patients with the limited interincisal opening.2

A 49-year-old man presented with a history of a self-inflicted gunshot wound post maxillary and mandibular surgical reconstruction. Due to the trauma, midface and lip support were severely compromised and several staged reconstructive procedures and lip reconstruction had been performed prior to presentation. Due to the reconstruction of his upper and lower lips, he had a limited incisal opening of approximately 17 mm (Fig. 1) with limited function of his circumoral musculature. Complete closure of the anterior defect could not be attained, and he continued to have compromised speech and regurgitation. The patient’s palate had a 2–3 mm oroantral fistula to the right of the midline. 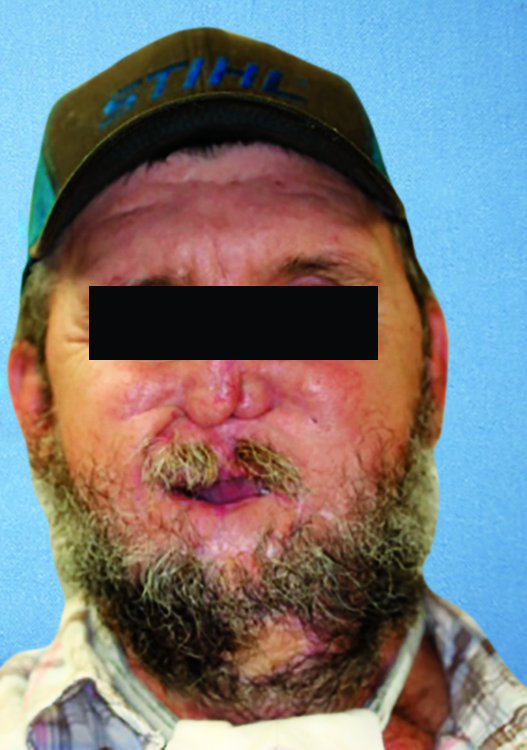 The limited mouth opening of this patient made conventional impression-making techniques impossible. The restricted opening can complicate treatment, and sectional trays may provide an alternative to such treatment. The decision was made to fabricate a two-piece sectional obturator prosthesis with magnets for retention and stability.3 An impression was made with condensation silicone material and poured up in type III gypsum (Denstone, Kulzer Southbend, IN). Triad custom tray material (Dentsply Sirona Charlotte, NC) was used to fabricate a custom tray which was sectioned and indexed with implant impression copings and analogs used as the handle to reapproximate the two segments extraorally. It was necessary to allow for ease of reassembly of the two separate segments extraorally as visibility and reapproximation of the two segments intraorally were not possible.4 Border molding of each segment, as well as the impression of the oroantral fistula, was done with green modeling plastic, and a final impression was made with a medium body polyvinyl siloxane (Henry Schein Roanoke, VA) (Fig. 2).

Figs 2A and B: Final impression of both segments

A processed polymethylmethacrylate record base, with magnets (Steco Titanmagnets, Steco-System-Technik GmbH & Co. KG, Germany) was fabricated for the two-piece occlusal rim (Fig. 3). Each segment was inserted separately and then attached intraorally based on the force of the magnets.5 Conventional denture methods to include only esthetics and phonetics, retention, and stability were evaluated for the final prosthesis (Fig. 4). At the time of delivery, the prosthesis was placed intraorally in two separate segments. Pressure indicating paste was placed on the intaglio surface and all areas of excess pressure and tissue impingement were removed. The prosthesis was attached intraorally and once in place, the patient’s speech, nasal regurgitation, and lip support were evaluated. Adequate retention, support, and stability were achieved as well as slightly improved lip support (Fig. 5). 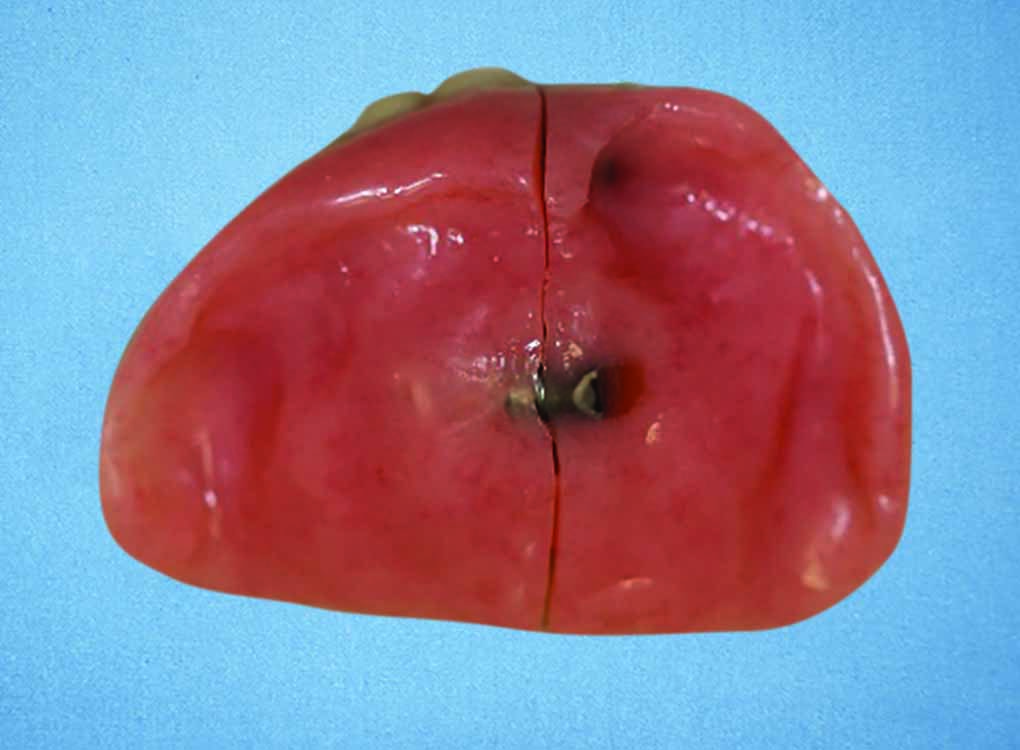 Figs 4A and B: Final prosthesis with magnets 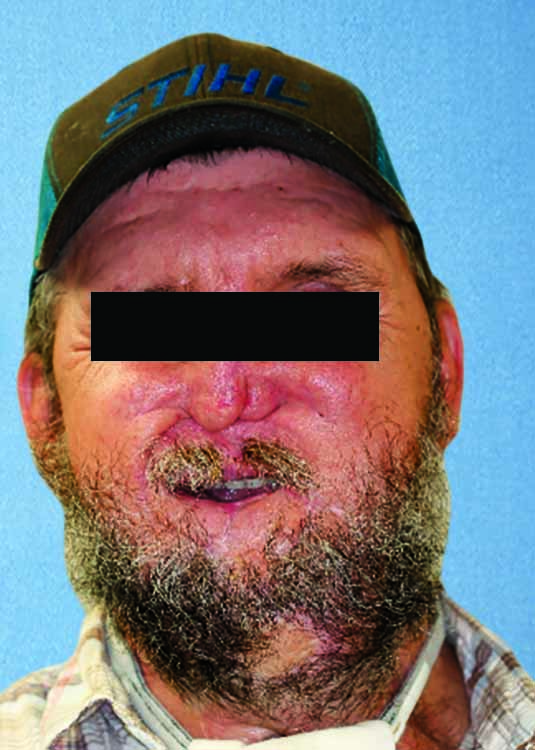 Fig. 5: Smile with prosthesis in place

A two-piece obturator prosthesis was inserted and removed by the patient. The two parts had different paths of insertion due to the patient’s extremely limited incisal opening. The two parts were able to be attached intraorally by use of magnets (Steco Titanmagnets), as each segment came into the magnetic field of the other.6

Steco was used as they are the only magnetic retention system using two active magnets (bi-magnetic). The open magnetic field allows a longer distance attraction and is also self-aligning, making it favorable in our current case as well as for individuals with dexterity issues. Steco magnets are samarium cobalt magnets welded in titanium housing making them more heat resistant and corrosion proof than other magnets. Their attraction force can vary from 1.6–3.0N. The oro-antral communication was small for this patient, therefore minimal attraction force was needed for adhesion of the two pieces.

Due to the nature of the self-inflicted trauma, surgical reconstruction, and the nature of the defect, normal anatomical structures were absent proving a challenge to attain intraoral access and normal anatomical borders for retention, support, and stability of the prosthesis. Although conventional denture fabrication methods were followed throughout the process, a mandibular denture was not fabricated due to future plans for mandibular reconstruction. The lack of an opposing arch eliminated the challenges of centric relation accuracy and occlusion in this patient. The patient did have a slight gag reflex, requiring reduction of the posterior palatal seal further, reducing the retention of the prosthesis. The final prosthesis slightly improved the patient’s cosmetic appearance in terms of lip support while improving speech and deglutition. The anterior oro-antral fistula was captured and obturated by the prosthesis once in place, thereby preventing the seepage of fluids into the nasal cavity.

The fabrication of this prosthesis greatly improved the patient’s quality of life as he was able to eat and speak normally again and thereby allowing him to become reconnected to society.7 Conventional denture fabrication protocols were utilized and therefore this procedure could be followed to aid the edentulous population with the limited interincisal opening as well.

Magnets have been used for the retention, stabilization, and maintenance of maxillofacial prosthetics, particularly for those with large postsurgical defects and magnets have also been used to connect segments of a sectional prosthesis, and in this instance provided a reliable and successful treatment of this patient.

Fabrication of a two-piece obturator prosthesis utilizing magnets has provided a functional prosthesis for this patient. The magnets allow for a locking mechanism between the two parts of the prosthesis, ultimately increasing stability and providing consistent retention. The patient reported significant improvement in speech and the occurrence of regurgitation. The magnets could also be utilized following conventional denture protocols to aid edentulous patients without oro-antral fistulas as well.

The author declares that there is no conflict of interest and that all informed consent was obtained.

The author would like to thank Christopher Norris, CDT from Image Dental Arts Asheville, NC for his assistance in the fabrication of this case.