Aims and objectives: The present study is based on a thesis submitted to the Dentistryimplants in anterior region and tilted implants in the posterior region with angulation of 30 degrees. To evaluate the stresses generated on bone, implants and superstructures in partially edentulous model (Kennedy class 1) using anterior straight implants and posterior tilted implants with angulation of 30 degrees.

Materials and methods: In the present study two maxillary FE (finite element) models were fabricated using CT scans. One model represented completely edentulous situation and other one represented partially edentulous Kennedy class 1 situation. Both the models had anterior straight implants and posterior tilted implants of 30 degrees angulation. These models were subjected to axial loading of 200N forces and the numerical values of the stresses generated were calculated.

Conclusion: Overall stresses generated on the completely edentulous models were found to be more than the stresses generated on the partially edentulous models. Therefore, it is better to retain remaining natural teeth and give a fixed partial denture supported by an anterior straight implant and posterior tilted implant than extracting and giving implant supported complete denture.

Complete edentulism has seen a decreasing trend in recent decade due to various advancements in techniques and materials in the field of dentistry. Added to this, public awareness about the importance of dental treatment has changed the face of clinical presentations. Very common clinical scenarios of partial edentulism with few anterior teeth remaining are on the rise especially in the maxilla. Because of the poor quality of bone in the posterior region and the huge forces exerted in the maxilla, patients loose their posterior teeth at much faster rate than anterior teeth. It now becomes a dilemma for the clinician whether to extract the few remaining teeth or to save them. So, it would help the clinicians to have an effective treatment plan for these partially edentulous patients based on the preservation of the existing structures (bone). One of the methods to understand this would be to study the amount of stresses generated on execution of different treatment options.

The severely atrophied maxilla represents a unique clinical challenge, and different approaches have been developed to augment available bone.1-3 Complex surgical procedures like bone grafting and sinus elevation are proven treatment options; nevertheless, patients may reject these procedures because of their invasive nature, increased risk of postsurgical morbidity, and high cost.2-4

Recent literature has revealed that such cases could be restored with minimizing the number of implants with the concept of tilted implants placed in the anterior or posterior sinus wall, the sinus septa, the palatal curvature, or/and the pterygoid process.5-7 This method advocates tilting distal implants in edentulous arches which enables us in the placement of longer implants, improved prosthetic support with decreased cantilever arm, increased anchorage, and distance between the implants. This technique of treating a completely edentulous jaw placing two anterior straight and two posterior tilted implants is known as all-on-4 concept.

The all-on-4 concept allows for immediate-loading to rehabilitate the fully edentulous jaw with a full fixed prosthesis.8,9 The use of tilted implants enables longer implants to be inserted near the anterior wall of the maxillary sinus. The anatomy of the canine region gives best support to these implants. the fulcrum of rotation also is located in the canine region which can withstand the stresses generated. However, the emergence of the implant platform is in the second premolar or first molar region, this provides satisfactory molar support for a fixed prosthesis of 10 or 12 masticatory units. Thus, placing implants parallel to anterior sinus walls with distal inclination9-11 improves bone anchorage and increases polygonal area for prosthesis support,11,12 while reducing the cantilever length and achieving a more favorable stress distribution in the bone.6,7,10,13-15

Also using two straight implants and two tilted posterior implants rehabilitated with fixed partial denture on both sides is a common treatment modality to rehabilitate partial edentulism (Kennedy class 1 situation). This situation can be also handled by extracting these few teeth and using all-on-4 concept. Here lies the dilemma of whether to extract these remaining teeth and to go for all-on-4 concept or to retain these teeth and use fixed partial denture which can be converted to all-on-4 prosthesis when the remaining teeth are lost by just changing the superstructure. So, this dilemma can be overcome by understanding the treatment options which generates least stresses.

Finite element analysis (FEA) is definitely an useful tool for understanding the effects of stresses on the implant and the surrounding bone.

The 3-dimensional (3D) geometry of completely edentulous and partially edentulous maxilla (Kennedy class 1), consisting of both cortical and cancellous bone, was reconstructed from computerized tomography scans by converting scans into stereolithography (STL) file. The STL file was imported to hypermesh for required connections for finite element analysis. Modeling software (SolidWorks release 2015, Solidworks Corporation, Waltham, Mass) was used to transform the planar computerized tomography scans into a solid model of the maxilla. The symmetry allowed the reconstruction of the maxilla. The arch had a radius of curvature of 22.5 mm and was 70 mm long, 18.9 mm high, and 8.5 mm wide. A 1.8 mm cortical bone layer was established, overlaying the entire maxilla, whereas cancellous bone was used in the entire internal structure, simulating type 3 bone.16 Using these geometrical configurations two models were fabricated. Two straight implants (Fig. 1) and two angulated implants (Fig. 2) were used for the study. 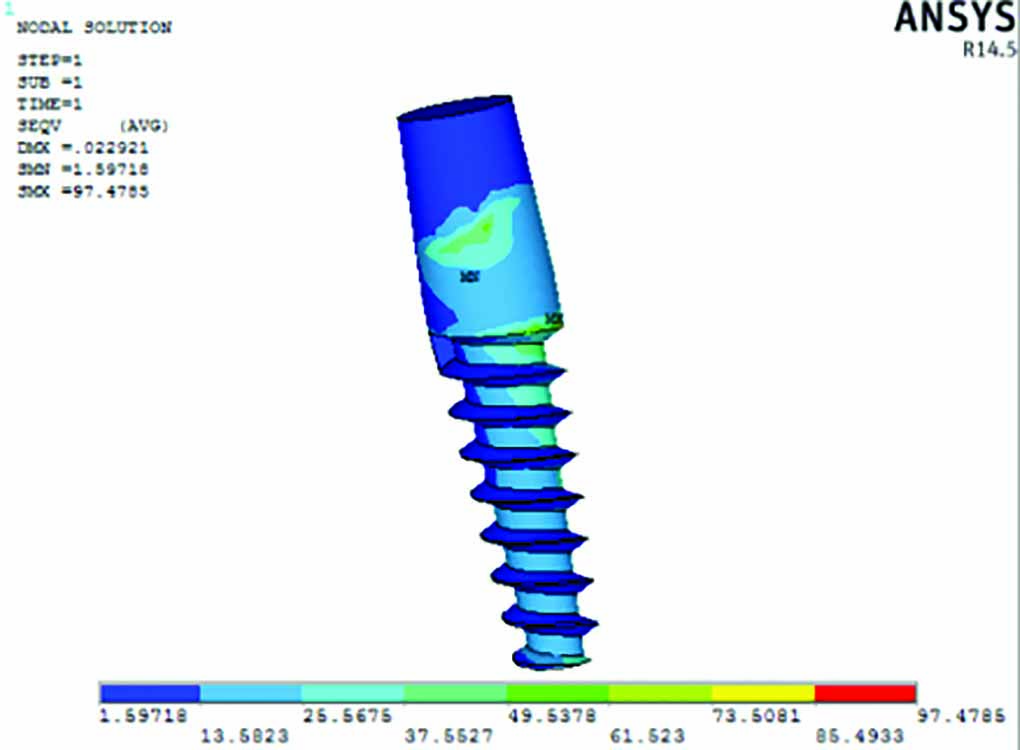 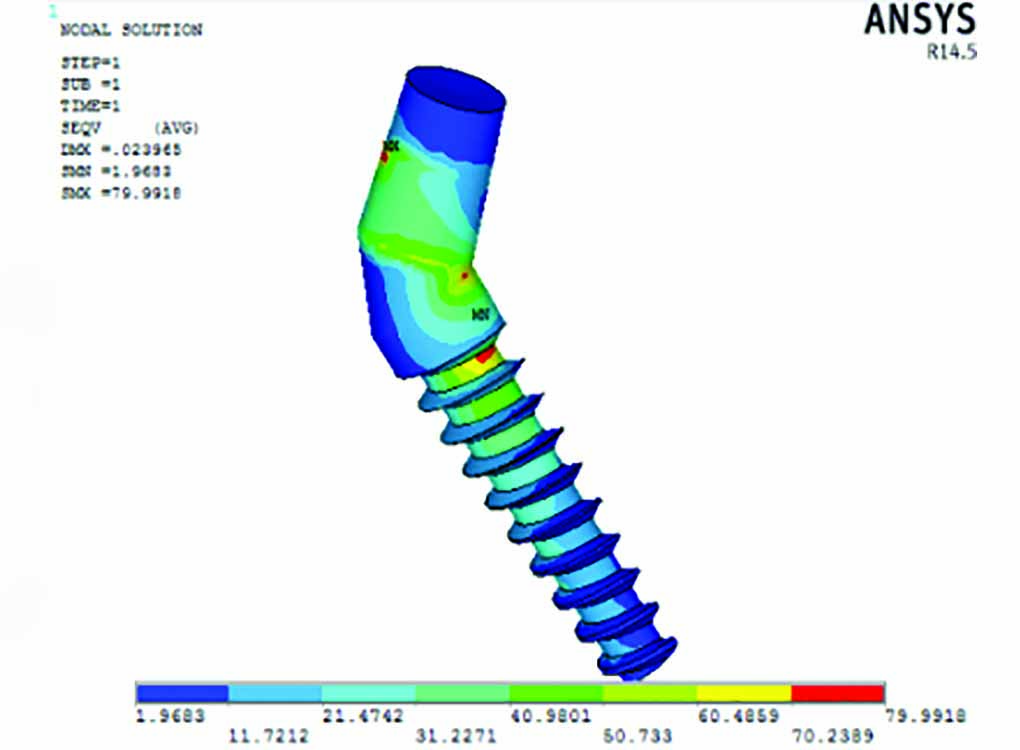 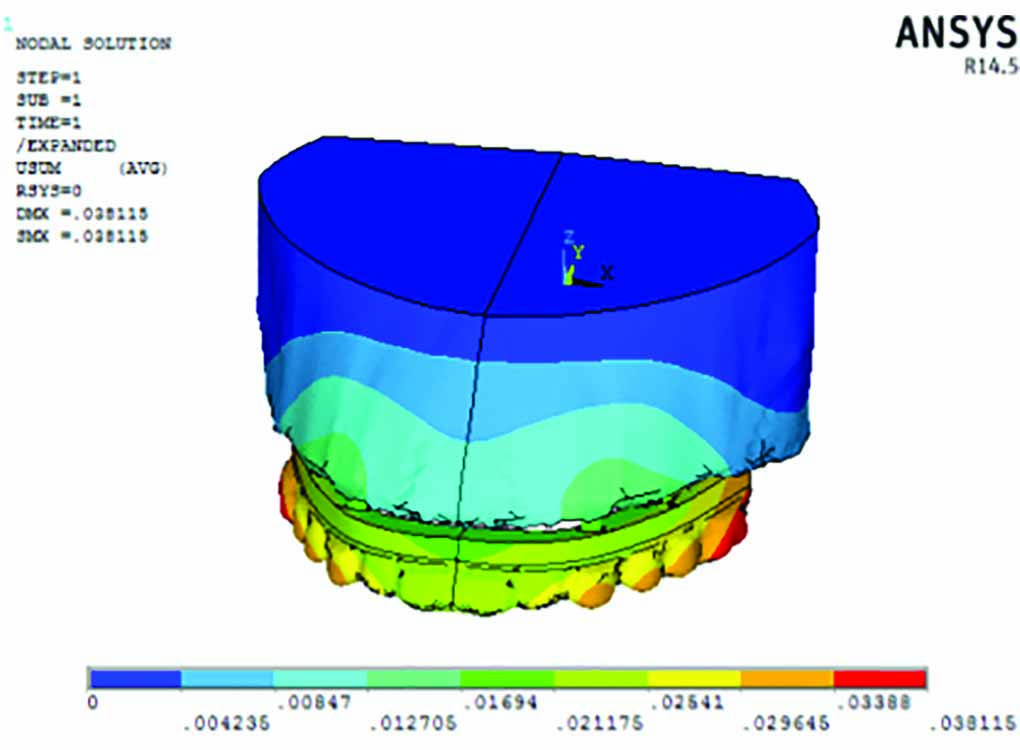 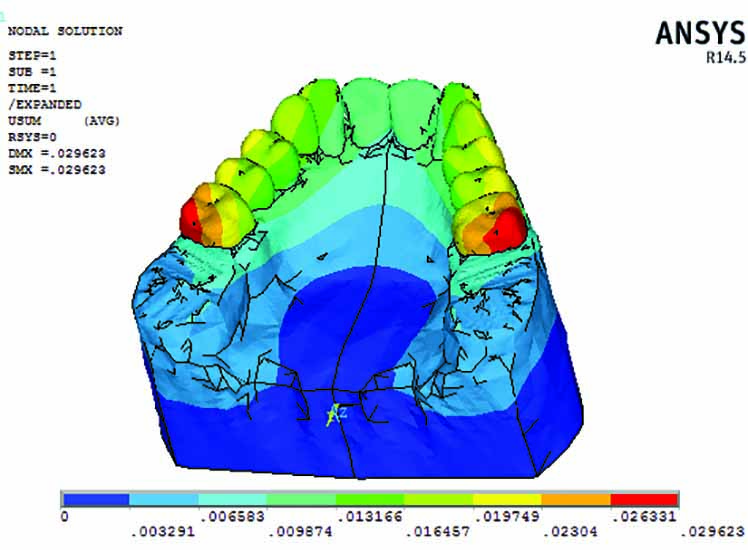 The following details were used to generate the same:

The two models were subjected to axial loading of 200N. Loading was based on averages found in the literature for patients with implant-supported prostheses.17 Output was in the form of numerical values and were plotted as contour maps. The mathematical results were converted into visual results characterized by degrees of color, ranging between red and blue, with red representing the highest stress values. The color gradient table was standardized for comparing. The results of the simulations were evaluated in terms of von Mises at the cortical and cancellous bone, straight and angulated implant and the overall stress and deformation. 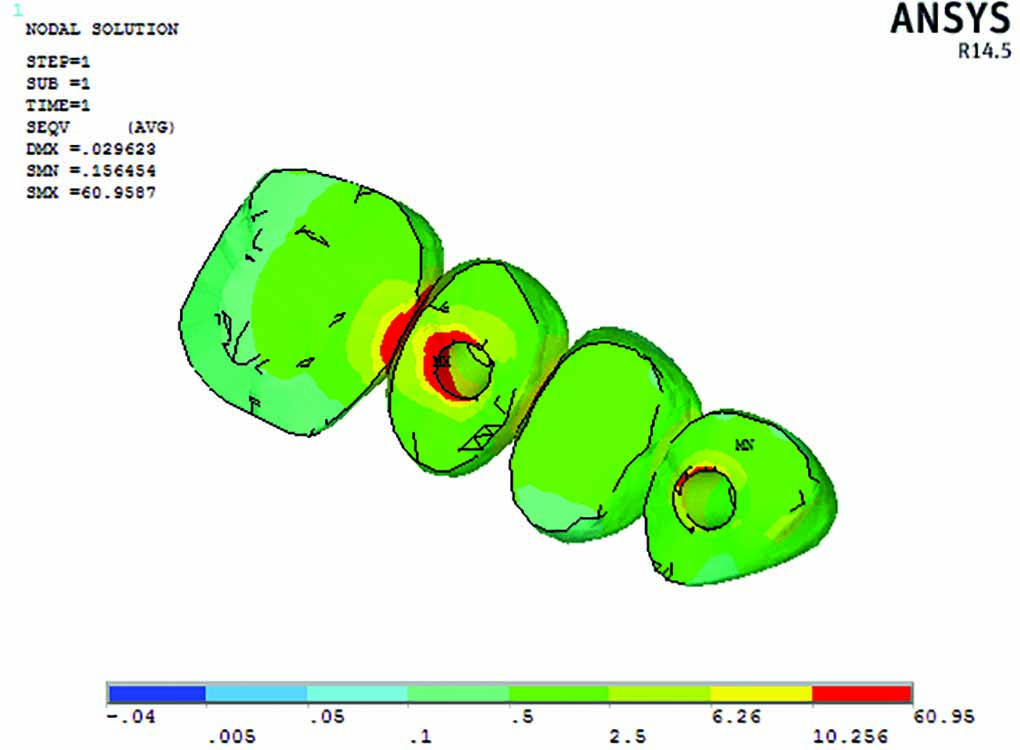 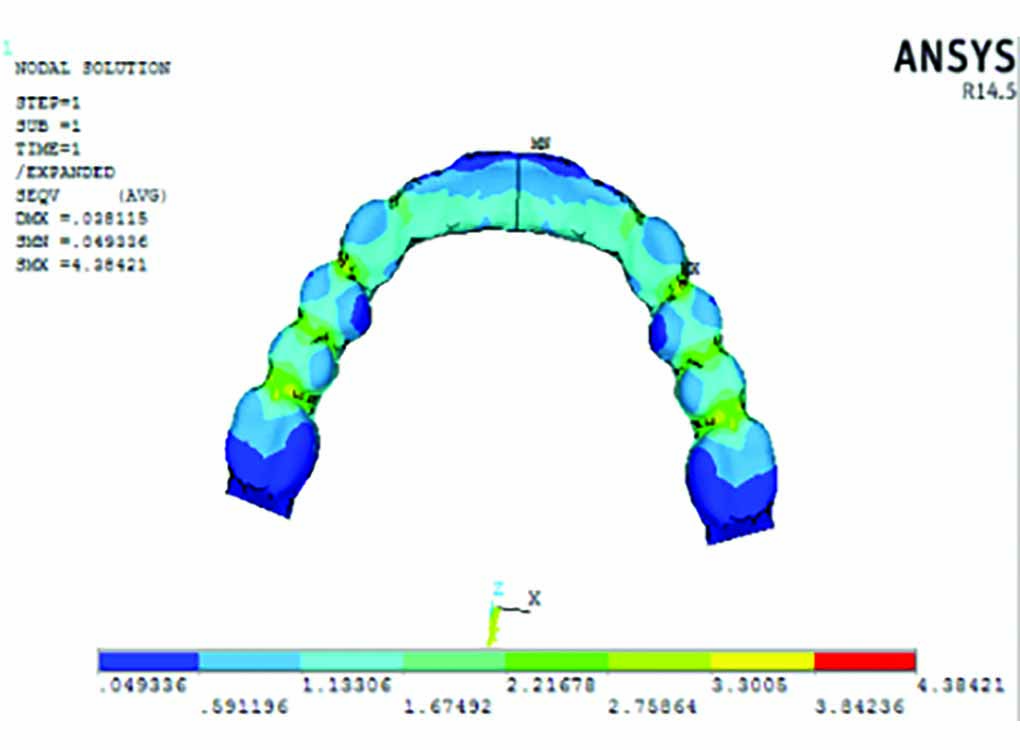 Finite element analysis is a useful tool when investigating complex systems that are difficult to standardize during in vitro and in vivo investigations.18 It has also been proved to be an extremely conservative, noninvasive tool in estimating stresses generated in the bone implant contact area, both in the cortical and trabecular bone. Finite element analysis has been established as a standardized procedure for qualitative as well as quantitative assessment of the stress distribution in various structures. With FEA, the mechanical behavior of the bone and implant system can be evaluated. A limitation of the FE models in the present study pertains to the mechanical behavior of bone that was assumed to be linearly elastic, homogeneous and isotropic. the living bone, unlike the FEA model, does not have a well defined pattern showing variations among individuals. the mechanical properties also cannot be accurately established.

Immediate loading for function can be achieved in the All on- 4 concept. The FE model used in this study assumed complete rigidity equating to full osseointegration before loading. Moreover, ideal conditions were established, such as 100% contact between bone and implant and perfect fit of implants, abutments, and prosthetic bars (absence of gaps or frictional coefficient). To preclude the appearances of internal tensions which could set the analysis off, absolute passivity in between components was assumed. Even in the absence of external loads, such tension can significantly raise the likelihood of failure. A perfect fit between the components combined with the framework rigidity is therefore essential to the longevity of the prosthesis.19

In both the models, the amount of stress in cortical bone was far more than the underlying cancellous bone similar to results of another study.20 This may, in fact, happen because of the higher modulus of elasticity of cortical bone which causes more stress.

It was observed that the stresses on tilted implants was more than the straight implants in both the models. When the tilted distal implants are rigidly splinted with a fixed prosthesis to the straight implants, the peri-implant bone stresses are increased in them, which has been supported by Weinberg and Kruger.21 He stated that for every 10° increase in implant inclination, there was approximately a 5% increase in implant/prosthesis loading. Canay et al.22 found that the compressive stress levels of the angled implant (12 MPa) around the cervical region was found to be five times greater than around the vertical implant (2 MPa) in the same area. These findings were also supported by Caglar et al.23 Naini et al.,24 Baggi,25 Ueda et al.26 Watanabe et al.27 and Bagg et al.28 who reported an increased stress concentration at the coronal region with an increase in implant inclination. This is because, when the magnitude or angle of the load is increased, the deflections and stress concentrations gradually increase. The inclination of the implant increases the shear component in the system.

Overall stresses generated on the superstructures of the completely edentulous models was higher than the stresses generated on the superstructures of the partially edentulous models. The Nickel-Chromium frameworks were more resistant to deformation because of their superior mechanical properties, and the structural differences in frameworks in turn affected the stress distribution in implant structure and bone.29 Benzing et al.30 have stated that the rigidity of the superstructure material had an influence on the stresses. The stress value observations were similar to those reported in the study done by Papavasiliou et al.,31 Bassit et al.32 and Cibirka et al.33

Less stresses were generated in cortical and cancellous bone when fixed partial denture was used as superstructure as compared with hybrid denture which means less force was transferred to the bone which will lead to less bone loss and prolong the survival of the implants. This may be attributed to the materials which have been used for the prosthesis. In completely edentulous model, a hybrid denture and titanium bar was used which has lesser Youngs modulus. The fixed partial denture in partially edentulous models are more rigid and undergo less deformation and therefore, less stresses are generated in cortical and cancellous bone.33

Because FE models reflect a simplification of the actual structure, the numerical results presented in this work must be considered as predictions within the constraints of the models presented. A limitation of the FE models in the present study pertains to the mechanical behavior of bone that was assumed to be linearly elastic, homogeneous and isotropic. The living bone, unlike the FEA model, does not have a well defined pattern showing variations among individuals. The mechanical properties also cannot be accurately established.

The FEA models used in this study assumed complete rigidity equating to full osseointegration before loading. Moreover, ideal conditions were established, such as 100% contact between bone and implant and perfect fit of implants, abutments, and prosthetic bars without any gaps or frictional coefficient. To eliminate the appearance of internal tensions which might set the analysis off, absolute passivity between the components was established. Such internal tensions can substantially increase the risk of failure even without external loads. A perfect fit between the components combined with the framework rigidity is therefore essential to the longevity of the prosthesis.19

For the reasons stated above, the findings from this and other FEA research must be interpreted with caution. The values should not be taken as absolute but should rather be used as a comparison of the possible magnitudes of stress that the bone and implant components undergo during function. More in vitro and in vivo studies have to be done in this field to confirm the efficiency of this treatment modality.

From the study it can be concluded that, it is better to retain remaining natural teeth and give a fixed partial denture supported by an anterior straight implants and posterior tilted implants than extracting and giving an all-on-4 implant supported complete denture as the stresses generated are less and this helps in preservation of the bone structure.