The human face, the most expressive part of the body, determines an individual's social acceptance.1 Loss of teeth not only affects the facial appearance, but also creates psychological trauma to the person. Hence, it is essential that an esthetically pleasing and functionally comfortable replacement of the missing teeth be provided.2 The patient who wears a complete denture for the first time wants its resemblance as of natural teeth. The esthetic rehabilitation of the edentulous patient improves the self-esteem and self-confidence of a patient.3

Pre-extraction records guide the selection of appropriate tooth molds for each individual.4 These include diagnostic casts, photographs, roentgenograms, extracted teeth, etc. The unavailability of pre-extraction records makes the selection of appropriate anterior teeth size difficult for the edentulous patient.5 Various anatomical measurements have been suggested, such as intercanthal distance, interpupillary distance, outer-canthal distance, interalar distance, bizygomatic distance, intercommissural distance, intracodylar width, and philtrum to overcome these circumstances. All these relations may be used in combination and utilized as reference for determining the width of the maxillary anteriors, although the measurements may be different considering race and gender differences.6 Several anatomic landmarks bear fixed positional relationships to some natural teeth. These landmarks serve as reliable guides in replacing natural teeth with artificial teeth.7 However; no universally accepted parameter currently exists for selection of anterior teeth in the local population.

This study was conducted to determine the proportional corelationship between the width of maxillary six anteriors with the interpupillary distance, intercanthal distance, and interalar and intercommissural distances in the Department of Prosthodontics, Maharashtra Institute of Dental Sciences and Research (MIDSR) Dental College, Latur, India.

Digital Vernier calipers, dental floss, marker pen, indelible pencil were necessary. This study was conducted in the Department of Prosthodontics, MIDSR Dental College and Hospital, Latur, India. The subjects were students, residents, and patients belonging to different parts of Latur district. The sample size calculation was done based on the mean and standard deviation of pilot samples. A total of 250 subjects were selected. The subjects were separated into two groups:

The ages ranged from 20 to 35 years. Informed consent was obtained from all subjects prior to their participation.

Each subject was seated in a dental chair with the head upright supported by the head rest, so that they look forward at the horizon and the occlusal plane of the maxillary teeth is parallel to the floor. Different measurements relevant to this study were taken. All measurements were made and recorded by one operator. Each parameter was measured three times and the average value was computed and recorded in a predesigned proforma. All measurements were carried out using an electronic digital caliper, to the nearest tenth of a millimeter.

The patient was requested to sit in a dental chair in an upright position with the head straight. The patient was asked to close the eyes and relax before the intercanthal distance was measured with the help of a digital caliper (Fig. 1A). For measuring the interpupillary distance, the participants were asked to look straight. The measurements were made from the midpupil of one eye to the midpupil of the other eye using a digital caliper (Fig. 1B). Interalar distance is the external width of the alae of the nose; it is recorded at the widest points of the alae using a digital Vernier calipers. Interalar measurement is taken in a relaxed state (Fig. 1C). Intercommissural distance is the distance from one angle of the mouth to the other angle of mouth using digital Vernier calipers. Intercommissural distance is recorded during the relaxed state (Fig. 1D). Mesiodistal dimension of maxillary six anterior teeth was measured with the help of dental floss passing through distal surface of the canine. Dental floss was placed at the greatest curvature of the maxillary teeth, and a mark on each side was placed at the distal surface of the canines (Fig. 1E). Dental floss was sectioned at the markings, made straight, and the distance was measured between the marks using digital caliper.

The goal was to rehabilitate an edentulous patient having the maxillary anterior teeth with optimal dentolabial relations in harmony with the overall facial appearance. However, there are certain fixed biological factors that guide in defining the proper size and shape of anterior teeth or determining normal relationships between them.

Correlation between intercanthal, interpupillary, interalar, and intercommissural distances with the mesiodistal width of the maxillary anteriors

Al Wazzan8 investigated the width of central incisor and the combined widths of the six anterior teeth with the biometric ratios of 1:0.267 and 1:1.426 respectively. In this study, the mean of intercanthal distance was found to be 31.50 mm for males and 30.58 mm for females, and multiplication factor was 1.6 for both males and females to get a combined width of maxillary six anteriors. Similar results was obtained by Al Wazzan8 (31.92 mm), Laestadius et al9 (30.00 mm), Aleem Abdullah et al10 (32.00 mm), and Freihofer11 (31.20 mm), which were smaller than the mean value reported by Murphy and Laskin12 (33.90 mm).

Pearson's correlation for all subjects 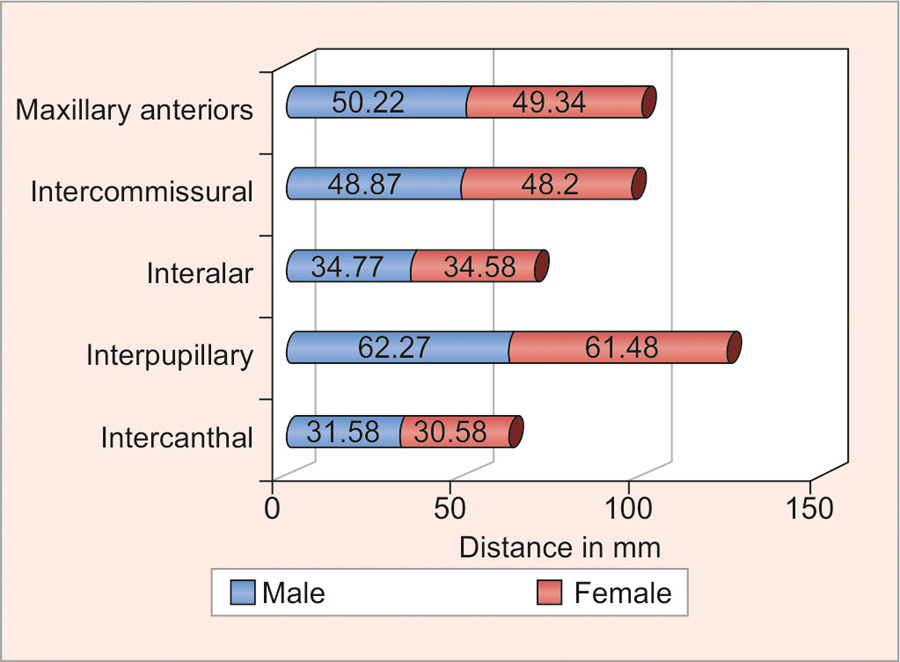 Correlation between intercanthal, interpupillary, interalar, and intercommissural distance with the mesiodistal width of the maxillary anteriors 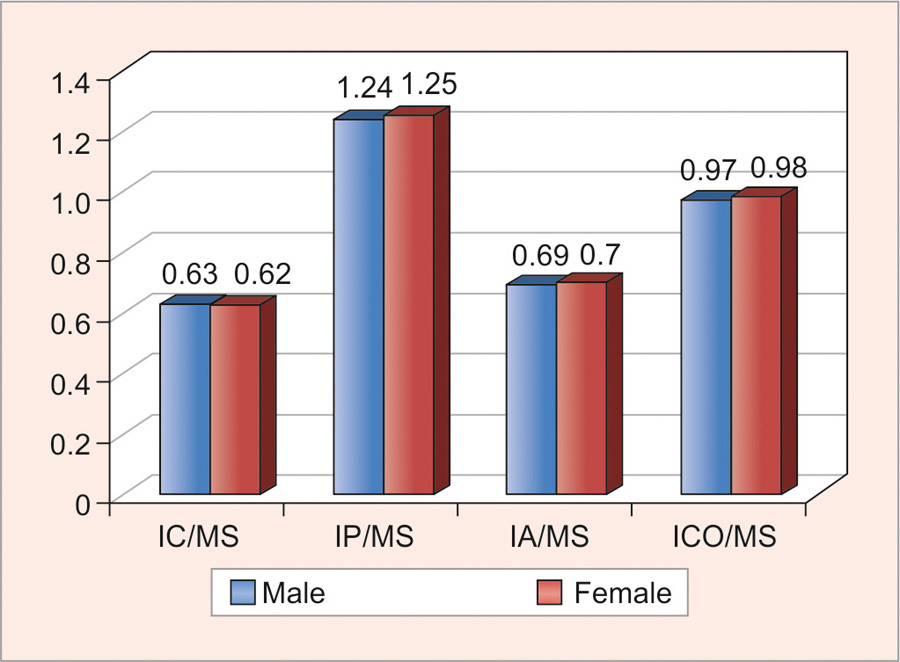 Hoffman et al15 obtained the combined width of the maxillary six anterior teeth by multiplying the interalar width by a factor of 1.31. The multiplication factor was 1.26 in a study conducted by Aleem Abdullah et al,10 while 1.35 was the multiplication factor in this study. Latta et al16 found in edentulous patients a mean of 43.93 mm, with a range from 29.00 to 63.00 mm.13 In this study, the mean of interalar distance was found to be 34.77 mm for males and 34.58 mm for females. Mavroskoufis and Ritchie17 found that the combined width of maxillary anteriors and interalar width correlated. Gomes et al18 found a ratio of 1:1.03 in Brazilian dentate subjects. Hoffman et al15 suggested that interalar distance increased by 3% to get the combined width of maxillary six anteriors.

Differences in the appearance of male and female teeth exist in relation to length, width, and axioincisal line angle. Gillen et al20 reported that the maxillary anterior teeth were wider and longer in male as compared with women. Similarly, Sterrett et al21 reported the mean width and length of the maxillary anterior teeth of men to be significantly greater in women in a white population. Also, the axioincisal angle is sharp in males and rounded in females. Results obtained in the study revealed the mean mesiodistal width of maxillary six anteriors for men (50.22 mm) was significantly greater than the corresponding dimensions for women (49.34 mm). These findings are in agreement with the results of related studies and the values were statistically significant.

Within the limitations of the present study, the following conclusions were drawn:

Hence, these measurements can be used for determining the width and position of the maxillary anterior teeth. In the future, studies should be carried out with greater sample sizes to extrapolate the use of these parameters for selection and arrangement of maxillary anterior teeth and make sure that we provide “incredible smiles” with naturalistic-looking dentures.